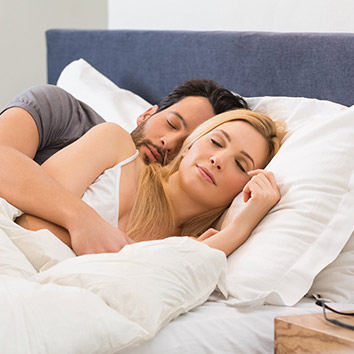 Being able to get a good night’s sleep and awake rested and refreshed improves your health and quality of life. Having your child realize his or her full potential health and appearance through optimum growth and health is enormously satisfying. Your best gifts are a great smile and self-conﬁdence.

Sleep Disordered Breathing (SDB) is a new term that includes open-mouth breathing and sleep apnea. Both conditions affect the growth and proportions of your child’s face and general health. As an orthodontist, I am concerned because I treat the consequences of these problems. You need to learn to recognize them and have them diagnosed by a specialist, such as an orthodontist, otolaryngologist (an ear, nose, and throat specialist), or a sleep physician. The best outcomes depend on early screening at age three, diagnosis, prevention, and treatment. It is important that all children be able to breathe easily and comfortably through their noses day and night in all seasons.

In a child, open-mouth breathing interferes with normal facial growth and development. How a child breathes changes the way the facial muscles and nerves function and grow and even changes the shape of the face, both the underlying skeleton and the soft tissues. In obstructive sleep apnea (OSA), repeated episodes of partial and complete blockage of the airway during sleep are associated with low blood oxygen and increased blood pressure. The brain is aroused, and sleep is disturbed.

When the total airway resistance becomes greater than 4.5 centimeters of water/liter/second (as measured by a device called a pneumotachograph), the jaw and tongue drop and move forward, and breathing through the mouth takes over. Anatomical changes follow. The distance from the nose to the chin gets longer, the lower jaw recedes, the nostrils become smaller, the upper teeth and gums protrude, the jaws narrow, and the teeth are crowded. Untreated, the result is long face syndrome or adenoidal facies, the medical term that describes a long, open-mouthed, slack-jawed face with droopy eyelids and prominent upper teeth and gums. This facial appearance may disrupt a person’s social development and erode his or her self-conﬁdence.

Begin by having your child undergo an early screening examination. Orthodontists are dental specialists with years of extra training in the recognition and treatment of problems related to the growth and development of the face and irregularities of the teeth. They have the knowledge and experience to diagnose the problem and can steer you to the right specialists to help treat the problem. Most orthodontists provide a free examination as a courtesy.

Recognition and treatment should begin early. From medical school, physicians remember that the tonsils and adenoids shrink by late adolescence, but by then, it is too late because the face is almost completely grown. The ﬁrst principle is to remove obstructions in the airway. Physics tells us that if you double the radius of the airway, the airﬂ ow through it increases by a factor of 16!

Professionals trained in the diagnosis and treatment of these disorders can help:

A sleep physician performs a sleep study to deﬁnitively diagnose sleep apnea, document the severity, and prescribe a CPAP machine and mask. These are effective, but a large percentage of patients do not tolerate them.

An orthodontist can perform rapid maxillary expansion (RME). This is an orthopedic procedure to stretch the mid-palatal suture and widen the palate. The nasal airway is on the opposite side of the same structures, so it is enlarged at the same time a crossbite is corrected. Conventional orthodontics with Invisalign or braces can reposition the jaw and improve the airway. Removable oral appliances for the treatment of dentofacial development issues and mouth breathing can be worn at night, after obstructions have been cleared. A removable appliance, such as the sleep apnea Herbst, can be used to open the airway by repositioning the lower jaw at night. There are a variety of appliances that are well tolerated.

An oral surgeon can perform maxillomandibular advancement surgery (MMA) to increase the pharyngeal space and airway by moving the jaws forward using the same principle as the CPR maneuver of pulling the lower jaw down and forward to open the airway. Surgically assisted rapid maxillary expansion (SARME) can reopen the sutures and allow the orthodontist to widen the upper jaw with the same appliance used for children.

An allergist can identify irritants and help remove them from the child’s environment and diet and can prescribe medications, nasal sprays, and lavage to shrink hypertrophied soft tissues.

Studies have shown that as many as 25% of children diagnosed with attention-deﬁ cit hyperactivity disorder may actually have symptoms of obstructive sleep apnea and that much of their learning difﬁ culty and behavior problems can be the consequence of chronic fragmented sleep.

Are you drowsy during the day with no explanation? Do you snore loudly or wake up breathless in the middle of the night? Have you been told you have completely stopped breathing for 10-25 seconds while you are sleeping? If you’re experiencing any of these symptoms, you may be one of more than 12 million Americans who are affected by sleep apnea.

What is sleep apnea?

Sleep apnea is a condition in which your breathing stops periodically during sleep, as often as 20 to 30 times per hour. Each time you stop breathing in your sleep, the resulting lack of oxygen alerts your brain, which temporarily wakes you up to restart proper breathing.

Since the time spent awake is so brief, most people with sleep apnea don’t remember it. Many assume they are getting a good night’s sleep when, in fact, they are not. The constant wake-sleep, wake-sleep cycle prevents those with sleep apnea from achieving deep sleep, which results in a constant drowsy feeling during the day.

What are the signs of sleep apnea?

The following symptoms can indicate the presence of sleep apnea. If you notice one or more of these, contact our practice.

Are there different types of sleep apnea?

There are three categories of sleep apnea. The most common is called obstructive sleep apnea (OSA), and occurs due to a physical blockage, usually the collapsing of the soft tissue in the back of the throat.

Less common is central sleep apnea (CSA), in which breathing stops because the muscles involved don’t receive the proper signal from the brain. And some people suffer from “mixed” or “complex” sleep apnea, which is a combination of obstructive and central.

What are risk factors for sleep apnea?

Other risk factors include obesity, smoking, drinking, use of sedatives or tranquilizers, and family history. Central sleep apnea strikes most often in people with heart disorders, neuromuscular disorders, strokes, or brain tumors.

Sleep apnea is a serious medical problem. If left untreated, it can lead to high blood pressure, and increased risk of heart failure and stroke. The ongoing state of fatigue caused by sleep apnea can lead to problems at work or school, as well as danger when driving or operating heavy machinery.

Sleep apnea can also cause complications with medication or surgery; sedation by anesthesia can be risky, as can lying flat in bed after an operation. If you know or suspect you suffer from sleep apnea, let your family doctor know before you take prescribed medication or undergo surgery.

How is sleep apnea treated?

Treatments for sleep apnea depend on the severity of each individual case, and the type of apnea. Basic treatment can be behavioral; for instance, patients are instructed to lose weight, stop smoking, or sleep on their sides instead of on their backs.

Beyond that, oral devices can be used to position the mouth in such a way that prevents throat blockage. In more severe cases, surgery may be the best option.

What should I do if I suspect someone in my family suffers from sleep apnea?

Contact our practice, and we can refer you to a sleep apnea specialist. The specialist may recommend a sleep study to diagnose the precise extent of the problem, and can prescribe appropriate treatment. Depending on your situation, treatment may involve an oral device that we can custom-design for you.